Fix: There was a Problem Parsing the Package

It’s very common to see the “There was a problem parsing the package” error when trying to install an Android app. This can be caused by a number of different things, but most often it’s due to either a corrupt APK file or a misconfigured device. In either case, the solution is usually fairly straightforward.

If you’re seeing this error, first try downloading the APK file again and make sure it’s not corrupt. If that doesn’t work, then try restarting your device in Safe Mode and see if the problem persists. If it does, then it’s likely that your device is misconfigured and you’ll need to factory reset it. Be sure to back up your data first!

Hopefully one of these solutions will fix the problem and you’ll be able to install your app. Good luck!

What is the problem?

There are a few possible reasons why you may be seeing the “There was a problem parsing the package” error when trying to install an Android app.

One reason could be that the app was not properly downloaded or downloaded from a untrustworthy source. If you’re trying to install an app from an unknown source, it’s always a good idea to scan the file for viruses before proceeding.

See also  How To Redeem YouTube Premium Code For Free

Another possibility is that the app is not compatible with your device. This is more likely to happen if you’re trying to install an app that is not designed for your specific device or Android version.

Lastly, it’s possible that there is a corrupt file associated with the app. This could happen during the download process or when the app is installed on your device. If this is the case, you may need to uninstall the app and then re-download and install it.

How to fix the problem?

If you’re having trouble installing a package from the Play Store, it could be due to a parsing error. This usually happens when the app is not compatible with your device, or when the package is corrupt.

There are a few things you can do to fix the problem:

-First, try clearing the Play Store cache. This will often fix the issue.

-If that doesn’t work, try uninstalling and then re-installing the app.

-If you’re still having trouble, contact the app developer for more help.

Why does this problem occur?

There can be a few reasons why the “There was a Problem Parsing the Package” error might occur when trying to install an Android app. One reason might be that the app was not properly downloaded or that the file is corrupt. Another reason might be that the app is not compatible with the device, either because of the Android version or the hardware. Finally, it could be that there is a security issue with the app, either because it is from an unknown source or because it has been flagged by the device’s security software.

See also  The Complete Guide to Deleting Your Snapchat Account.

If you see the “There was a problem parsing the package” error message when trying to install an Android app, it means that there is something wrong with the app’s APK file. The most likely cause is that the APK file is corrupt, but it could also be that the file is incomplete or has been tampered with. In any case, you won’t be able to install the app until the problem is fixed.

There are a few things you can try to fix the problem:

– Try downloading the app again. Sometimes the problem is just that the download was incomplete or corrupt.

– If you’re installing an app from outside of the Google Play Store, make sure that you’re allowing apps from unknown sources in your device settings.

– If you’re sideloading the app (installing it from a source other than the Google Play Store), try using a different method to sideload the app, such as ADB.

If none of these solutions work, then the problem is most likely with the APK file itself and you won’t be able to install the app. You can try contacting the app developer to see if they can provide a new, working APK file.

If you’re still having trouble parsing the package, there are a few additional things you can try.

If that doesn’t work, try using a different USB cable. Sometimes, the cable that came with your phone isn’t the best one to use. Instead, try a high-quality USB cable.

Finally, if you’re still having trouble, you can try installing the package on a different Android device. If the package installs without any issues on the other device, then the problem is most likely with your original device. 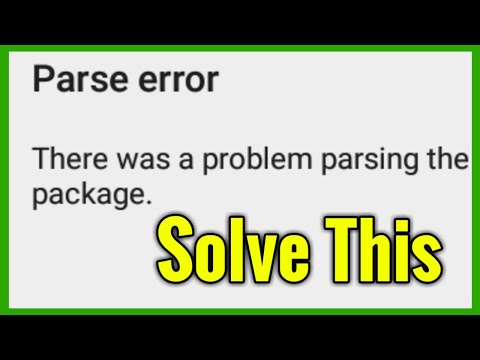 How to fix Failed to initialize BattlEye Service: Generic Error